We present the Hostal Castell de Pradell de Sió, located in the village of Pradell Sió, municipality of Preixens, region of La Noguera. A building declared (Cultural Asset of National Interest) with a total area of 900 square meters. 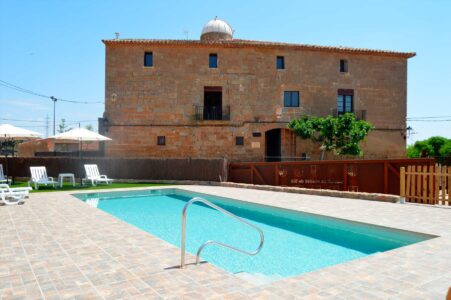 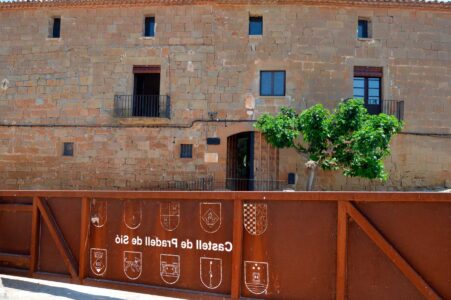 The ground floor of the castle consists of the main entrance, the dining room for guests with optional access to the outdoor patio, toilet for the disabled and the multipurpose room with TV.

The first floor consists of 3 double bedrooms and one single. 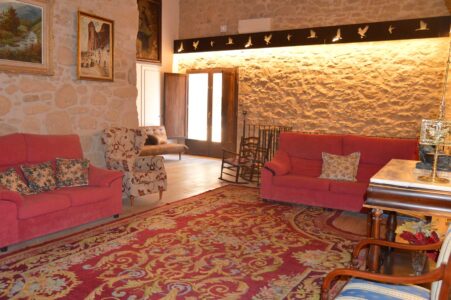 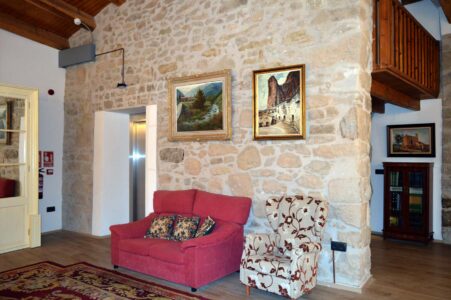 In front of the castle you can enjoy the swimming pool to cool off in the summer, accompanied by a dry sauna and a garden to enjoy a good nap.

At the top of the castle we have the turret, on the roof, a real viewpoint of the Sió Valley and the Montsec Mountains, accessed from the second floor, where you can see one of the best sunsets of Ponent. On the other hand, the guest will be able to enjoy the views towards the Sierra de Almenara and the river Sion from the battlements of the castle, with a floating corridor specially built to give more openness to the spectacular landscapes of the surroundings.

It has 9 double rooms and 1 single room, all equipped with bathroom, wifi, heating, air conditioning and large format TV. 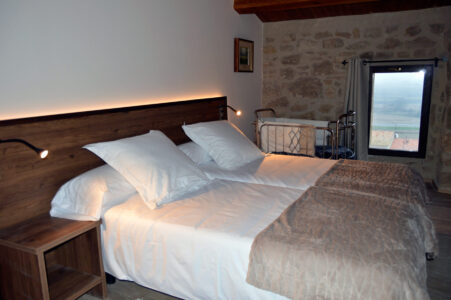 In front of the castle you can enjoy the swimming pool to cool off in the summer, accompanied by a dry sauna and a garden to enjoy a good nap.

At the top of the castle we have the turret, on the roof, a real viewpoint of the Vall del Sió and the Montsec Mountains, accessed from the second floor, where you can see one of the best sunsets of Ponent. On the other hand, the guest will be able to have its own parking service next to the castle.

The castle offers bed and breakfast. For lunch and dinner it can be ordered in advance via external catering.

The Castle’s Spa – Wellness area is located in the cellar, where there will be a jacuzzi and wet sauna. (next inauguration)

We offer two double bedrooms measuring 180 cm wide by 200 cm long, the single room has a bed with a size of 135 cm. And finally we have 7 double rooms with single beds of 90 cm x 200 cm and, which can be attached and covered with double sheets. 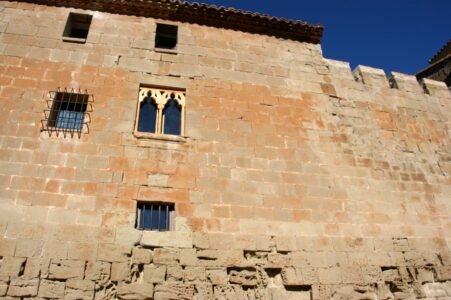 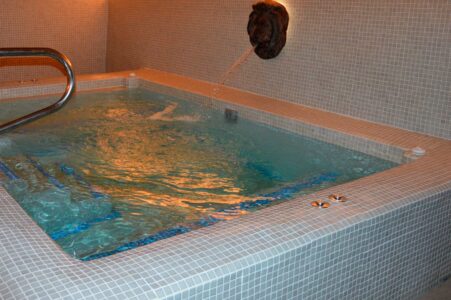 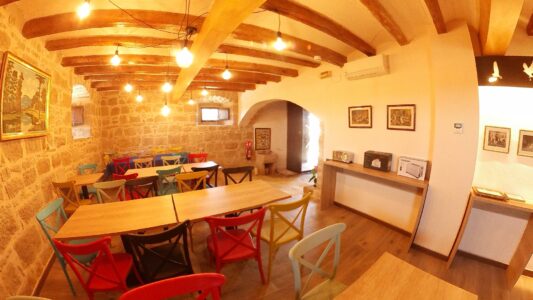 Brief history
The medieval castle, together with the Church, is part of the same monumental complex. It has been documented since 1086 when the spouses Guillem Bernat and Adelaida bequeathed it in their will to the canonry of La Seu d’Urgell. It was named Quermançó Castle because it was built on cyclopean rocks.
It was ordered to be built by order of the Counts of Urgell, after the reconquest of Old Catalonia to the Arabs, so that it formed part of a barrier of castles that would prevent their advance towards New Catalonia. Most castles were granted to the knights who took part in the reconquest, who took the name of the conquered place. Thus, during the twelfth and thirteenth centuries, the saga of the Pradell is documented. Arnau de Pradell signed in 1187 the proclamation of “Peace and Truce” decreed by the count of Urgell, Ermengol VIII, following the advice of Alfons el Cast, king of Aragon, and which put an end to the clashes of the counts with the Cabreras , Viscount of Ager, eternal rivals.
In August 1191 he signed as the king’s representative, together with Gombau de Ribelles, in the Distribution of the States of Ponç de Cabrera agreed by the count of Urgell the king of Aragon.
They swear by the King: Arnau d’Agramunt and Bernat de Belestar.
They swear by the Count of Urgell: Gombau de Ribelles and Arnau de Pradell.
Source: 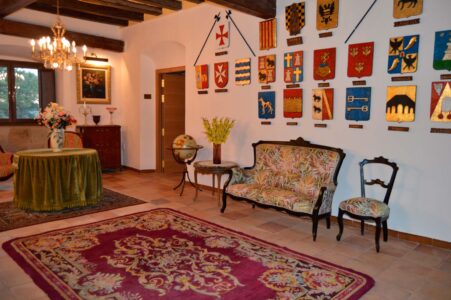 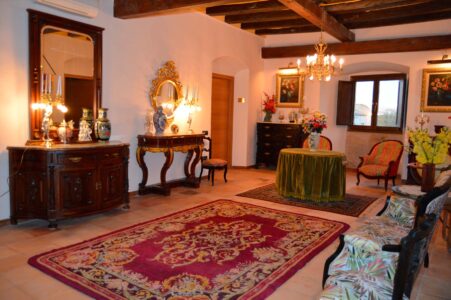 In the 14th century, due to the decline of the power of the nobility and the power of the bourgeoisie, the castle passed into the hands of Honorary Citizens of the city of Lleida who traded it as any private property. It gave prestige and the ability to buy property, especially castles and land with all its civil and military jurisdiction.
The 15th century is a dark century in the history of the castle, little is known about it except data from the early years. It is the black century for Catalan castles. Later, at the beginning of the 18th century, Philip V ordered their destruction to prevent the formation of nuclei of resistance against the Bourbon monarchy. The few that survived were converted into stately buildings with no military function.
In … Ana d’Alentorn, daughter of the Lords of Seró contributed the property of the castle as a dowry …
In 1626, Ramon de Margalef was ennobled with the title of Gentleman of Pradell and shield of Arms was granted to him. In 1666, Gaspar de Portolà i Pont, baron of Castellnou de Montsec, bought the Lordship of Torre de Pradell with all its civil and military jurisdiction from Mr. Juan Manuel de Cardona, count of Biraben. He was the great-grandfather of Gaspar de Portolà i Rovira, discoverer, conqueror and first governor of California. For more than a hundred years, the Portolàs owned the castle and were the ones who carried out the great reform of 1738.
In … Ignasi de Pons i Sastre, notary of the Intendance Mayor of the Principality of Catalonia, bought the property of the castle with all its civil and military jurisdiction. His wife, appears in a notarial protocol as “baroness of the place and term of Pradell”. From the 18th century, the village of Pradell de Sió was known as Pradell de la Baronia or de la baronessa.
At the end of the 19th century, the notary Pau Civit d’Albareda, born in the nearby castle of Castellblanc, bought the property from the Pons family. It is currently in the hands of his descendants.